Life with psoriatic arthritis (PsA) differs for everyone. No experience is the same. To highlight diverse experiences during Psoriatic Arthritis Awareness Month, we are spotlighting some active community members.

We recently spoke with Shahida J. Memon, an active follower on our Instagram. Shahida frequently interacts on our Instagram page, sharing her PsA story. She is very passionate about raising awareness for PsA. Time to get to know Shahida!

When were you diagnosed with psoriatic arthritis? 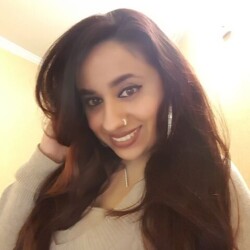 I was recently diagnosed, around early 2020. After trying to figure out what was happening with me and being unable to determine the reasons for the pain, I was diagnosed by my rheumatologist at the time via physical test, blood test, etc. I had to figure out what doctors to go to and sometimes left feeling disheartened.

I first started having crucial pain in both shoulders, elbows, knee, and foot, and my right middle finger was stiff and sore. I ended up getting a splinter for that finger and a steroid shot for my shoulder. The pain did not go away. It got to a point where I was unable to change my clothes, brush my hair, anything! Wow, this was beyond frustrating, and I found myself crying all the time.

Eventually, I woke up with each finger on both hands impacted: swollen, in pain, stiff, red, enlarged. I knew this was getting serious, and at first, my rheumatologist was unable to distinguish rheumatoid arthritis from PsA as they are both similar, but it made sense for it to be PsA, as I have the skin inflammation already. She even mentioned that I may have a negative rheumatoid factor. My blood work instantly gave away my extremely high inflammation levels, and I also became anemic. I was concerned. I also recall how extremely horrible the pain had been. I just could not even think about anything else and felt so helpless dealing with the excruciating pain. I wanted to give up on life.

Anything seems to trigger my PsA flares, whether it be stress, a particular ingredient, overworking my body, doing something too fast when I should be pacing myself, weather, etc. – literally anything, so I always have to prepare myself. This impacts my life tremendously as there are no warning signs and it slows me down because then, I am unable to function or ease the issue.

Dealing with the pain along with the other issues such as stiffness and swollen joints makes it extremely difficult to do anything, not to mention it leaves me very fatigued. I have compression gloves to aid me, as well as a few other gadgets to help make my life simple.

What is the most important thing you have learned since living with PsA?

The most important thing I've learned while living with PsA is that it is a very serious autoimmune disease that involves many more issues than just joints. PsA tends to attack tissues, ligaments, and tendons before it reaches the joints, so it can be frustrating that the issues won't show up on a typical x-ray, especially when someone knows there is an issue going on inside their body and x-rays may not pick it up yet. It's important to do a test via ultrasound or MRI.

PsA impacts other body organs along with serious skin inflammation. Living with PsA, I've also learned that my previous life no longer exists and that I have new responsibilities when it comes to my health and being able to function in dealing with this condition. It can impact anyone at any age!

What is beneficial about this community?

What I find beneficial about this community is the fact that they are super dedicated to raising awareness for PsA and individuals living with rheumatic PsA disease. It's so important to me that awareness is raised and understood globally. I've learned so much more about living with this condition and the issues that come with it. I appreciate the solid information provided to everyone and coming together as a community to help us live with this, along with educating PsA patients and everyone else.

My illness is not invisible

My PsA journey has been a scary and challenging one. However, with strong awareness and good doctors, I am coming to grips with and accepting my new condition. I don't know what tomorrow and the next day will bring, but I aim to be strong and positive. I found a better rheumatologist, who ensures I am not in pain and takes his time with me. Unfortunately, my first rheumatologist rushed in trying to treat me, and it just did not work for me.

My current medication helps me to somewhat function but does not take away the problem. I am still in my journey to ease the inflammation levels throughout my body. My illness is not invisible, as one can clearly see the physical symptoms. My PsA journey will continue to teach me, and I pray this disease will not leave me in a horrible state and condition.

The Decision to Switch Treatments for Psoriatic Arthritis

Sausage Fingers and the Validation I Never Knew I Needed

Please read our rules before commenting.

Will you help others by taking our Psoriatic Arthritis In America survey?